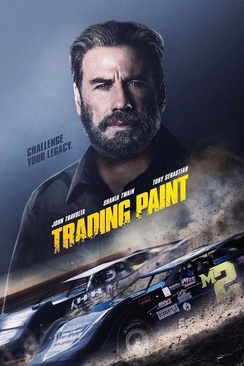 There were two reasons that attracted me to this film. One, with John Travolta appearing with Michael Madsen, this is probably as close as we will ever get to the long-rumored Quentin Tarantino film about the Vega brothers. Two, despite not being much of a race car fan, I consider Days of Thunder to be vastly underrated and I'm always on the lookout for the next great auto racing film.

Sadly, Trading Paint finishes woefully behind the pack on both counts.

The film follows a legendary father and son racing team that comes to blows when the son's career is seemingly blocked by his father's shoddy equipment. Naturally, the son is lured away by his father's great rival on the track, setting up a three-way collision when John Travolta's father gets back behind the wheel on the racing circuit.

Speaking of Quentin Tarantino, we can thank (blame?) him for this current downward trajectory of John Travolta's career. With his career-resurgent role in Pulp Fiction, John Travolta got a second lease on life in Hollywood and he has mostly taken advantage of it, but these last few choices are boggling, to say the least.

Gotti was unwatchable and Speed Kills wasn't much better. No, if Travolta isn't careful he will need another career life preserver thrown his way and time isn't really on his side. It's a shame because before he got carried away with the whole Scientology and Battlefield Earth thing, he was building a respectable career that could have blossomed even further.

With so many of his contemporaries such as Mel Gibson and Kevin Spacey impaling themselves on their own controversy swords, the time was ripe for John Travolta to take advantage and land all of the primo leading male roles. As it stands, he joins his fallen brethren on the sidelines and the future is not looking too good either.

Trading Paint is written as a starring vehicle for Travolta, but he shoots himself in the foot with odd and deliberate acting choices. He really seems gung ho for the overacting award, even if the scene doesn't call for it. In particular, the scene where his son tells him of his decision to race for his rival, John's power move of clearing off his desk is just bizarre and takes the audience out of the scene.

There are other instances where John Travolta just sucks the air out of the scene, causing the film to slow down to a crawl. There's a wasted romantic subplot between his character and one played by Shania Twain that is simply a head-scratcher, especially since we earlier found out that he still beats himself up for accidentally killing his son's mother in a car accident.

The odd thing is that the film could have risen above its shortcomings, but the writing just continually short circuits any momentum. And let's not forget that the races are on a small dirt track. There are very few opportunities for long action sequences that build tension. Instead, they should have focused on the abrasive claustrophobic nature of the sport.

I still believe in my heart that Hollywood can create another superb auto racing film, but after watching Trading Paint, the search continues. With the Indy 500 being contested this weekend, it's pretty obvious why Lionsgate picked this release date. But it will take much more than trying to draft off the Indy 500 to save Trading Paint's prospects.

No, this film quickly heads for the pits and if only it could have stayed there. If you're looking for a quality auto racing film this weekend, might I suggest watching Days of Thunder again or giving the classic film Winning a shot.

Trading Paint is now available on Blu-ray and DVD.