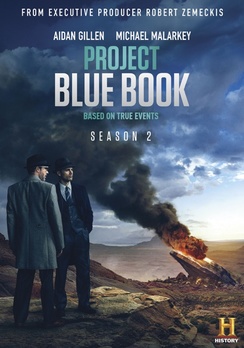 Since I started reviewing Season Two of Project Blue Book, it was announced that the History Channel has canceled the series. This is a shame because, as you will see below, the drama based loosely on declassified government reports really found its mark this season.

The show was gaining momentum and from the sound of things from the showrunners, they had the next couple of seasons broken already. While there still remains a modicum of hope that another network or streaming service will resurrect Project Blue Book, it will most likely be the latest casualty of an impatient network unwilling to allow a property to build an audience organically.

I truly believe that this show was on the cusp of becoming the next sensational Sci-Fi hit ala The X Files. Now, we may never know, but one thing is clear, the creators left behind a wonderful second season that truly elevates the show to another level and if we never get another episode, I'm hopeful that we will get these further stories in one form or another.

Season Two of Project Blue Book continues the adventures of Dr. J. Allen Hynek and Air Force Capt. Michael Quinn as they investigate unidentified aerial phenomena for the U.S. Air Force. Their investigations take them back to Roswell and the newly created Area 51 and all points in between as they attempt to explain away what they can with science and puzzle over the rest.

This season starts out with an action-packed two-parter in which the series has a spiritual reboot at Roswell. It's clear from the get-go this season that things are a bit different with less interaction with the Russians and more emphasis put on the stories that are at the core of Project Blue Book.

The action doesn't stop there either. The next episode introduces the audience to Area 51 and the CIA's involvement and the season is officially off to the races.

What I loved most about Season Two is that it was less soap opera and more mystery and mystique. I thought Season One fell a little flat when it constantly shifted to the Russian spy plot and Hynek's wife. This season, they find a more natural way for her to become involved in the story and it just feels less jarring.

Sure, her weekly UFO group is a bit convenient, but I didn't mind it as much as I did the constant Russian interference. I mean I get it. These events happened in the midst of the Red Scare and the onset of the Cold War, so it's only natural to include them, but I was far more impressed with how they weaved back into the plot towards the end of this season.

I thought they put a nice bow on the Russian spy angle, but kept options open for Ksenia Solo to come back and reprise her role as Susie Miller. Her performance was great, but I just felt that the whole story took the train off the rails a bit. It would be interesting to see if she was slated to make an appearance as a double agent and potential further love interest for Quinn.

The main antagonists this season are the shadowy Men in Black and I feel like they were given just enough to make them interesting, but not so much as to be bothersome. Given the cliffhanger ending, we may never know for sure, but I felt that this organization was ripe to take a big step forward in Season Three and I was ready to see where it went.

My favorite episode of the season by far was the stand-alone story titled "Curse of the Skinwalker." If it was a direct homage to The X Files, then they knocked it out of the park. Either way, this episode got as close as any other show to emulating the creepiness and ambiguity of The X Files. It was a strong indication of where this show could go beyond the alien mythology that is naturally driving the first two seasons of Project Blue Book.

It's a shame that we will probably never get the see the creators' full vision for this series. It was poised to have a breakout season, but we will have to settle for this most excellent season of scripted television. If you haven't discovered it yet, give it a spin. The real Dr. J. Allen Hynek was a consultant for Steven Spielberg on Close Encounters of the Third Kind and we get a wonderful glimpse of it in a great flash-forward episode this season.