Review: 'The Room' is a cinematic wish come true 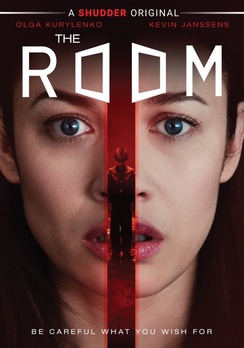 In our last review, we talked about the grim slate of new releases for the foreseeable future. The longer that cinemas are closed due to COVID-19, the more "creative" the studios will be forced to become to keep retail stocked with desirable films.

While Survive The Night is an example of a casualty of this pandemic, The Room is on the other end of the spectrum. This is a film that might have been lost in the clutter of a busy release date, but with less competition, it is given a chance to find a wider audience. If you those off-kilter, bizarre films, then this is a very good thing for you.

A couple leaves the troubles of big city life behind for a more authentic experience in an old house in the country. They soon discover a secret room that has the extraordinary power to materialize anything they wish for. Having unlimited wishes might seem like a dream come true, but they soon realize how quickly dreams can turn into nightmares.

The initial vibe that I got when I watched this film was another recent gem that I reviewed Vivarium. While both films explored similar concepts, they did so from vastly different perspectives and I found that I enjoyed them both. If you are a fan of Vivarium, then I strongly recommend that you check out The Room.

I felt that the pacing was dead on and the story veered enough from the initial concept that I didn't feel like the simple setup ever lost my interest. The film preyed upon many fears such as the unknowns of buying a new house and the isolation experienced when you move into a place that is significantly set apart from the rest of society.

Recently, The Lighthouse comes to mind as a movie that centered on the psychological effects of isolation. Initially, I was wondering if The Room was all in their heads or if it actually conjured up their deepest desires. The thought was shortlived and I think the film is better for not diving deep into this rabbit hole, but I'm left to wonder if the physics involved is even possible or whether it makes more sense to explain the film away as being all in their heads.

Of course, that twist would have been less satisfying and I'm quite happy with how the events concluded and the bit of a twist that the movie leaves up with. From a conceptual standpoint, the film is quite ambitious and tells a compelling tale, even if we are left to wonder about the origins of the room and the inner workings of it. Ah, thoughts best left to ponder in a sequel perhaps.

And yet, I really hope that there is no followup to this movie. Sometimes, the quirkiness is hard to replicate and the eventual sequel would be facing a losing battle even before filming commenced. As it stands, The Room leaves you questions both inane and philosophical. These are the types of questions that go well over pie with a good conversationalist.

At the end of the day, you can't really ask for anything more than that. With the studios' cupboards becoming barer with each passing week, we need to be on the lookout for these type of films that will pique our curiosity in the meantime.

The Room is now available on DVD.