Review: 'One Night in Bangkok' leaves you with a killer hangover 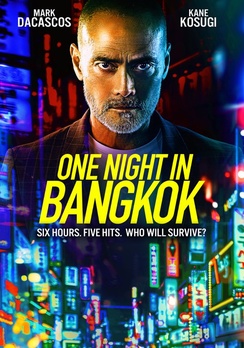 Stop me if you've heard this one before. A hitman travels to an unfamiliar city and hires a driver to shuttle him around while he carries out killings.

If you said Collateral with Tom Cruise and Jamie Foxx, you'd be correct. Of course, if you said One Night in Bangkok, you would also be correct.

It's not like the latter film is doing much to disguise its uncanny resemblance to the earlier film, in fact, One Night in Bangkok is doubling down on it in its marketing materials by describing it as Collateral with a shocking twist. Whatever that twist is though, I'm still looking for it as the film is rather straight forward and the ending is rather obvious pretty early on in the movie.

I suppose the shocking twist is having a female driver played by fresh face Vanida Golten who more than holds her own against vet Mark Dacascos. Whatever the case may be, One Night in Bangkok embraces the familiar and should find a receptive audience in the release-starved environment brought on by COVID-19.

Dacascos is a hitman who is out for revenge over the course of one night Bangkok. After his family is brutally murdered, he arrives in Bangkok, gets a gun, and hires a driver to drive him all over the town for his evening of vengeance.

Mark Dacascos is an action star and former host of Iron Chef America, so he brings a certain cachet to the film. He was most recently seen in John Wick 3: Parabellum and that film is a pretty good barometer for the type of him you will get in One Night in Bangkok. The quality difference between the two films, however, couldn't be more apparent.

I'd call One Night in Bangkok something akin to John Wick-lite in which the bombastic, non-stop action of the better film franchise is distilled to smaller vignettes that connect pointless exposition and character development that often falls flat.

The odd thing is that it's not the cast that pulls the audience out of the film, but rather a sloppy and hodge-podge script that was assembled by writer-director Wych Kaosayananda. The funny thing is that Kaosayananda has plenty of experience on big-budget action films and has even worked well with Dacascos before in the highly enjoyable The Driver.

There's just a bit of a disconnect here as it seems that two completely different stories are fighting for our attention. When it works (mostly in the action sequences), One Night in Bangkok is a strong direct-to-video action movie that will satiate an audience starving for new content.

But when it slows down, the movie really shows all the bruises and duct tape holding it together. I really wish they had spent more time fleshing out the story because I thoroughly enjoyed Collateral and it seems that we can't get enough of revenge-style mass killing films. It's certainly chic right now, but sadly One Night in Bangkok delivers about the same number of cheap thrills as "One Night in Paris."

And yet, this is the reality of the home entertainment landscape during COVID-19. The amount of high-quality action films releasing these days is quickly dwindling. Any normal release week, One Night in Bangkok would be a forgettable B-movie action film with a C-level star circling the drain to irrelevancy.

But, thanks to COVID, One Night in Bangkok is a relatively strong performer and will find a receptive audience begging for more action. At the end of the day, the movie scratches an itch and will help us bridge that gap until box office releases trickle down to home entertainment.

The good news is that the first major release hit theaters this past weekend. The first time in five months with a wide release and, if all goes well, the pipeline will be flowing back to normal in no time.

One Night in Bangkok is now available on DVD.