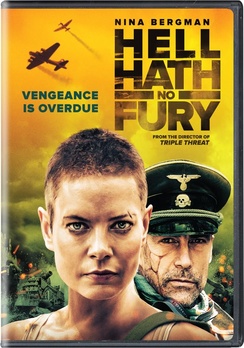 If you've turned on the History Channel or Discovery lately, you'll know that "Nazi gold" is all the rage these days. There are no fewer than half of a dozen shows searching the countrysides of Europe to America to Peru in search of the elusive treasure.

And don't get me started on the shows that try to prove that Hitler survived the war.

So, the proverbial wheels are greased and the pumps are primed for Hell Hath No Fury a supposed true story about World War II, Nazis, and yes, gold.

HELL HATH NO FURY is the story of one woman who single-handedly takes on the might of the German war machine, the French resistance, and a band of US infantrymen. Branded a traitor by her countrymen, French national Marie DuJardin is rescued by American soldiers on one condition: to survive, she must lead them to a cache of goldâbefore the Nazis return to claim it for themselves.

The movie begins and ends with Nina Bergman, who plays lead French national Marie DuJardin. She lives a complicated life as the girlfriend of an SS officer and a spy for the French resistance. When gold enters the equation, all bets are off as greed trumps all.

Bergman is a breath of fresh air who must carry the film not only as basically the only female in the cast but also as its moral center. As a relative unknown, I wasn't that familiar with her work, but I quickly became a fan. She shows both strength and vulnerability as bullets literally buzz by her head.

While Hell Hath No Fury doesn't dwell too much on the gray areas that punctuated World War II, it's not hard to connect the dots. War has a way of changing a man and it's apparent that by the final days of the conflict, all sides are less concerned with morality and more focused on their own individual futures.

Whether it's the Nazi officer looking to run off and put the war behind him or the Americans looking to take back a little treasure to the homeland, the politics of war take a back seat to human nature. That nature is greed and it rears its ugly head in many films and books over the years.

There has also been a macabre obsession with the "spoils of war" and this sentiment forms the basis of Hell Hath No Fury. Everyone is looking out for their own interests, but their inherent greed ultimately leads to a final resolution that would surely make Quentin Tarantino smile.

Try as I might though, I couldn't find the historical inspiration for Hell Hath No Fury. It's possible that it's based on a true story in much the same way that Fargo is based on a "true story." In other words, it's not. But, with the vast ocean of stories that came out after the war, it's possible that these events could have happened.

Or at least something that resembles Hell Hath No Fury.

What I do know is that Hell Hath No Fury is quite an entertaining film. The acting at times is a bit stiff, but it serves the plot just fine. The real star is Nina Bergman and thankfully she shines enough to cover the imperfections of her castmates.

Hell Hath No Fury is now available on Blu-ray and DVD and if you're a fan of World War II movies, then you'll definitely want to check this one out.