Review: Vestron gets into the holiday spirit with 'Silent Night' collection 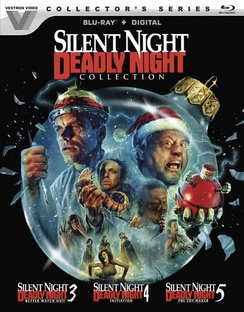 It's no secret that I absolutely adore the Vestron Video Collector's Series from Lionsgate. It doesn't hurt that I watched most of these films when they came out repeatedly.

But as we've detailed here numerous times, this Vestron series is taking these cult movies and giving them the red-carpet treatment they deserve. With the spate of streaming services popping up, there's a real void for films from smaller studios or boutique labels that no longer exist.

Many times, these films get lost in litigation (Dogma anyone?) and never see the light of day again. Sometimes, however, these movies get a boost thanks to the fine people at Lionsgate. The result is the Vestron series where not only are the films being made available again but they are loaded with bonus features that would make any fan cheer.

Prepare for a trilogy of pure terror with this collection of films from the SILENT NIGHT, DEADLY NIGHT series. In BETTER WATCH OUT!, it's a very bloody Christmas after Ricky Caldwell, the notorious "Killer Santa Claus," awakens from a six-year coma with one thing on his mind: murder. In INITIATION, a reporter's investigation into a mysterious death leads her into the clutches of a cult that's chosen her as its new queen, and THE TOY MAKER stars entertainment legend Mickey Rooney as a toy maker whose creations display some very human â and deadly â tendencies.

And it's mostly held up all these years later.

Look, I get it. Scream Factory (aka Shout Factory) owns the rights to the first two films and does great business on them, but I will always scratch my head as to why they couldn't come together to create an exhaustive set of every Silent Night, Deadly Night movie. It's just so weird to have this collection cover films 3, 4 and 5, but that's Hollywood for you.

But, playing devil's advocate for a moment, there's a pretty good chance that the core audience for this Vestron collection already owns the Scream Factory Blu-rays, so by doing it this way, it saves them from having to buy the first two movies again. And yet, it's still weird to have a collection only contain movies 3-5, but hey we should be happy that these movies are finally available on physical media.

To give you an idea of how out of print these films were, none of the three movies in the Silent Night, Deadly Night Collection have been made available on any physical format since their original VHS release. If you watched the first trailer above, you'll remember that the price tag back then was a hefty $90 per VHS back then.

Ah yes, the salad days of physical media before the move to ownership and sell-through priced goods whittled away at the profits of everyone from the large studio to the little guy who owned your local video store. So, unless you tucked away your VHS copies of these three films, then this collection will be a great way to finally own/complete your collection.

And that's where this collection really shines.

The Vestron Video Series excels at offering robust bonus features on its films, many of which are new to format or just plain new altogether. Since none of these films have been released on DVD or Blu-ray before (individually in the United States, yes there's an existing DVD collection, but the bonus features are nonexistent), all of the added content is ripe and ready for consumption.

Featuring a host of commentaries, interviews and featurettes, this collection truly is the Holy Grail for all of us Silent Night, Deadly Night devotees out there. There are hours upon hours of goodies to discover here and it will keep even the most ardent horror fan content for a couple of weeks.

Like all of the Vestron selections that came before it, the Silent Night, Deadly Night Collection lives up to the extremely high standards of the previous offerings. If you're even a casual fan of this franchise, I can't recommend enough how much fun you'll have with this set.